Nyenga celebrated its 5-year anniversary in the beginning of October. Ugandans are experts at celebrations and this anniversary was no exception!

Lead by Justine from the health center, a local committee planned the day. Employees, children and community members all contributed to making it a successful celebration. 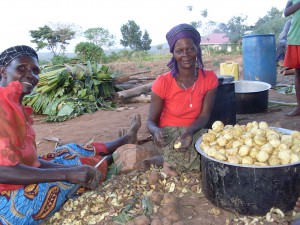 Women from the community were in charge of the cooking. They started preparing the food already 24 hours in advance and kept the pots boiling through the night. The village’s chairman sat guard at nighttime, to prevent theft in the night’s dark hours.

The day of the celebrations started at 7 a.m. The employees and children from the children’s home had a morning run from downtown Nyenga to Nyenga Children’s Home. This is a distance of approximately 4 km. It is not common to go jogging in Uganda, especially not in the countryside. Most people are in physical activity when working in the fields. They are not in need of extra physical activity, which often is necessary in a Norwegian lifestyle. The idea behind the morning run was to emphasize that Nyenga Children’s Home is innovative and does things slightly different than what is common.

The morning run was continued by a soccer game. New Horizon Primary School had in advance held a soccer tournament. On the day of the anniversary the final was played. 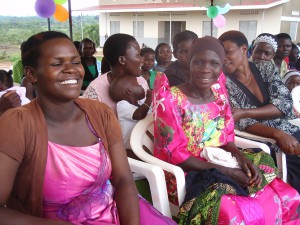 The celebration was then held at the school area. There were 350 guests! Robert, Nyenga’s social worker, led the ceremony. The employees had written a song, speeches were held, the pupils at New Horizon sang and trees were planted on the school premises. The pupils also performed dances, choreographed by a dance instructor. And food was of course served. It was a proper feast with amongst others mashed bananas matooke, chicken, pork and goat’s meat. 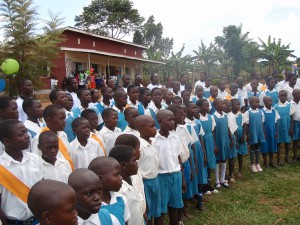 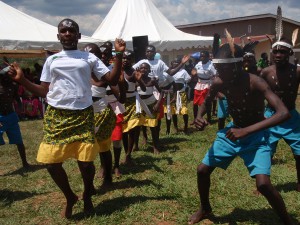 Chairs were for the occasion rented from one of the women’s groups Nyenga supports. It is a win-win situation when we can utilize the services our groups offer. The women’s group also contributed with a speech during the celebration.

Nyenga received generous gifts from Norway in relation to the anniversary. Thanks to sponsors, guests and contributors for gifts, contributions to and participation in the festivities. We are looking forward to the next 5 years! 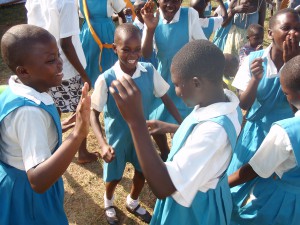