Engineers Marte Wigen Nilsson (Multiconsult), Richard Kringlebotten (Norconsult) and Mats Kahlström (NGI) visited Nyenga during a mission for Engineers Without Borders Norway. The article below is from the Norwegian Geotechnical Institute’s webpage, ngi.no.

On a 2-week mission for Engineers Without Borders Norway (IUG), Mats Kahlström from NGI helped survey the existing water, sanitation and power facilities at the Nyenga Children’s Home in south-eastern Uganda, Africa.

As one of Engineers Without Borders Norway’s (IUG) main partners, NGI supports by sending experts to assist with Norwegian aid projects abroad, as well as supporting IUG financially every year. During a wet and rainy July in Uganda, Mats Kahlström, who works at the Onshore Foundations section at NGI Oslo, spent two weeks improving water resources for a local children’s home.

“Arriving in Nyenga, a rural village some 4 hours by car from the capital Kampala, our first impression of the water situation was quite positive. Situated close to Lake Victoria, the area receives plenty of rain each year during two distinct wet seasons. The community had almost 20 years ago constructed natural spring wells, which provided a steady stream of water year around”, explains Mats Kahlström.

Mats and his colleagues inspected a hand-dug shallow well on the property of the Nyenga Children’s Home that was connected both to a gravity water tank with a small solar-powered pump, and manual hand-pump. The team’s initial assessment of the water sources quickly concluded that supply was far greater than the current demand. 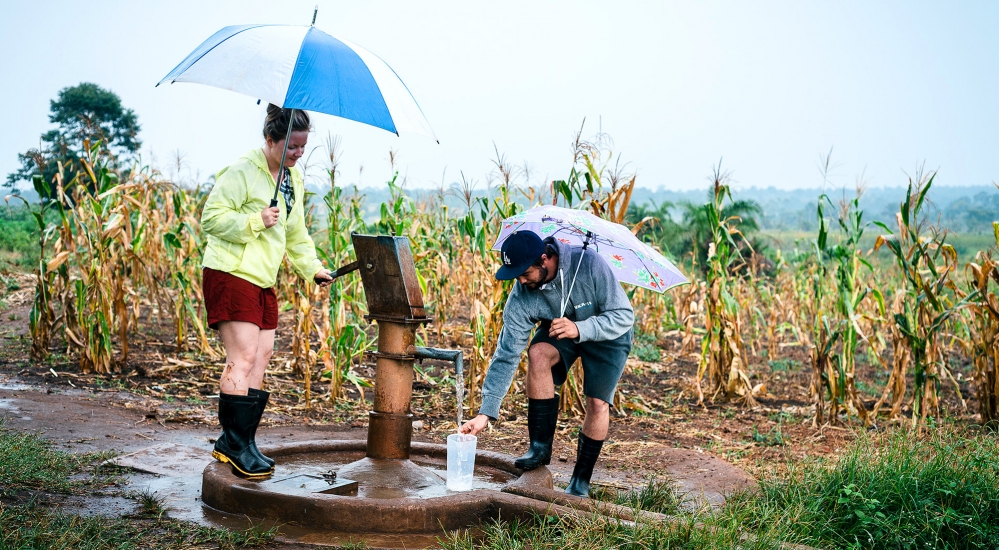 However, as Mats and his colleagues started to talk with the local people, it came to their attention that discolouring and contamination of the water had become an issue in recent years, especially during periods of heavy rain. After inspecting all the wells in the area, especially the upstream lands above the spring wells, the IUG team concluded that human intervention was the likely cause.

“Removal of top soil for clay brick fabrication, cutting down vegetation and creating wider footpaths all contributed to weakening the soil’s ability of filtering the rain water. As a result, the well water would turn brown after heavy rains, forcing the local people to walk further distances in order to collect water each day”, says Mats.

Is the water safe to drink?

The team’s following concern related to water quality. Was it really fit for drinking? Water contamination from faecal matter was a concern, as animals roamed freely around the wells. Mats and his colleagues were told that most people would boil their water before drinking it, but during their stay Mats observed many school students drink directly from the wells.

“Our short-term recommendations was to fence-of the well areas, return topsoil to areas where digging activities had been performed and re-plant vegetation upstream of the wells to prevent erosion. Furthermore, we recommended to perform a lab-test campaign, measuring the water quality and observe any change over time from wet to dry seasons. By implementing our recommendations, the people in and around Nyenga Children’s Home will have access to better and safer water”, concludes Mats.